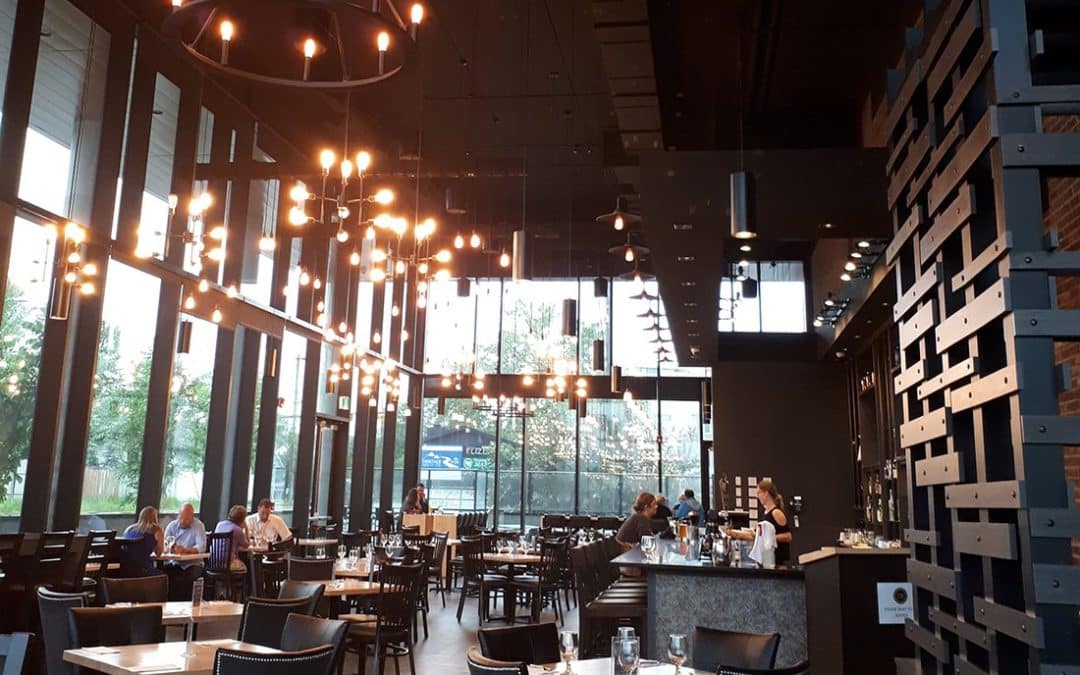 This year Simply Elegant has found its home at Skyline, a 10,000 square foot space with 14 ft. ceilings located on the top floor at 1918 Kensington Road NW. This space is in a relatively new multi-use building with a lounge and restaurant for The Royal Canadian Legion, North Calgary Branch No. 264 members, and a public restaurant on the main floor appropriately titled 1918 Tap & Table.

We chatted with Mark Barham, Branch Trustee, to find out how this building came about and what they plan for the future. We found out this building is a rare concept by a Legion branch and the opportunity for Skyline as Simply Elegant’s home was a dream come true for both parties. Here’s Mark’s story.

MB: “The process for developing this building started 8 years ago. I got involved and found the old building that was built in 1956 was falling down with little funding to continue operating it. I was appointed as the Branch Trustee to take control of the entire operations with the Executive stepping aside.”

It was a chance to rally the troops and find out what could be done to save the branch. Mark was determined the Legion needed to move to the land next door by way of a strategic partnership with a land developer. It wasn’t an easy task, but in the end Truman Homes stepped in with the help of City Councillor, Druh Farrell. On a hand-shake deal, the new building proceeded in 2017.

MB: “After the building was built and the restaurant was operating, my daughter, who is a Legion Member, asked to see the top floor of the building. At that time, the space was empty. She said to me, ‘You want this to be office space? This should be a bridal area; this should be the kind of space I would want to get married in.’ At that time, there was a huge vacancy rate for office space in Calgary, and without any takers, I took my daughter’s idea to the membership.”

While there wasn’t a precedence on how an external party would operate an event facility, Mark found the right fit for the top floor in Simply Elegant.

MB: “I talked with Robert (Vidra, owner of Simply Elegant) and he came back with an idea of how to create a venue with creative finishes which are up there now and are spectacular. Since then, the interest has gone out the roof.”

It’s a win-win situation. The Legion gets revenue from leasing the venue to guests and Simply Elegant has a home in which to feature its all-in-one hospitality services which include catering, event and wedding planning and décor, florals.

MB: “This space is so unique with such a great view. In the future, Rob and I talked about him taking over the roof top patio. It would be a good addition for weddings, to take their guests up a staircase to the roof.“

Now that Skyline is launched on the top floor, what are the plans for 1918 Tap and Table restaurant?

MB: “We recently changed the menu in the restaurant. The Legion members were finding the previous menu too expensive and in retrospect, we were trying to get a different market. But we found that a higher-end market really didn’t exist in Kensington. So, we did an analysis of the sales and found 30% of sales was coming from ‘pub food.’  We were selling burgers and fries because it was the cheapest option on the menu. It told us the market was not what we thought it was going to be.”

1918 Tap & Table has now revamped its menu to include reasonably priced, flavourful food. By recognizing they missed the mark in the beginning, Mark was able to adapt to what their customers wanted. Since then, restaurant sales have impressively increased.

The menu includes a range of Appetizers and Salads, Mains and Pizza. A great selection for the Legion Members and residents in the community.

1918 Tap and Table, along with the launch of Skyline as a venue on the top floor, is a welcome addition to the Calgary scene.

Celebrate in 2021 and enjoy  this special offer with our room and romantic wedding decor.

Get the offer details!